Whissendine Walks : To Ashwell and around

This walk takes you from the Church of St Andrew to the Church of St Mary in Ashwell, taking in field paths, bridleways, quiet lanes and a couple of level crossings. The walk is approximately six miles and involves some mild ascents (all ascents are mild in Rutland) which are rewarded with splendid panoramic views. You’ll need just the one OS map: Explorer 234. There are plenty of stiles-sadly, not all dog-friendly-and some nettles, so long trousers are recommended. 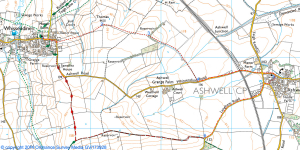 St Mary’s Church, Ashwell The church was founded in the 12th century, and much of the structure dates from the 14th. The church was extensively remodelled in 1851 by William Butterfield, who is responsible for the rather charming lych-gate. St Mary’s holds the tomb of Reverend John Adams, its one time vicar who was the first clergyman to be awarded the VC for his courage in rescuing soldiers under fire in the first Afghan war.

History bit
Loodle Lane is an Iron Age track, for much of it’s length it is effectively a Ridgeway, leading from Borough on the Hill at one end to Stamford at the other, passing Alstoe another ancient place that was the site of the Norman Motte & Bailey castle, before that it was the Danish meeting place, and was in use much earlier in the Iron Age. Alstoe is on the Burley to Cottesmore road by the water tower. Unfortunately, the stage to Burley is now blocked, as the footbridge which carried the path over the old Oakham canal was washed away some years ago and has never been replaced. The track through Exton was destroyed in quarrying for Ironstone.