Whissendine Walks : To Teigh and Back

If you don’t know it, this is a delightful family walk: fit for children and dogs. In recent years, the local authority has upgraded the stiles (now with dog-friendly hatches) and the signage is much improved. It is a circular walk of between 4 and 5 miles and takes in paths which are part of the ‘Rutland Round’ (see notes at end). The maps required are OS Explorer 234 and 247. The usual precautions about taking a stick and avoiding bare legs apply here: when the nettles are in bloom, they are lethal! We have described the walk in two parts: from Whissendine to Teigh and then the return leg (residents of Teigh need, of course, to reverse the order!). We start and finish the walk at St Andrews Church on Main Street, Whissendine. Ckick on the map below to view a larger version. 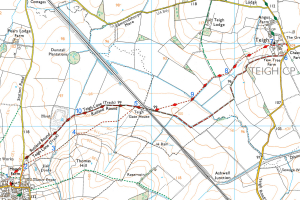 The Whissendine Manors
This walk passes 3 of Whissendines 4 old Manor house site sites, which existed in 1320. The first you will see at point 1, with humps suggesting the old foundations, this was Whittlebury Manor, the field you are in was called the Park, and is thought to be a small deer park. The second manor is called Moorhall an ancient monument situated in a large field near point 10, but best viewed from the top of the hill at point 4. The last manor you will pass is our later, intact Manor house in Station road, the first building you come to as you enter the village on the left, this used to be called Hellewell Manor. 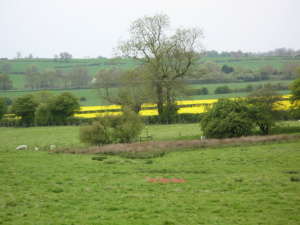 Notes
The Rutland Round The Rutland Round is a 65 mile-long footpath walk devised by John Williams, a retired teacher, which follows roughly the boundary of the county, taking in many attractive views and interesting sites of Rutland. John’s illustrated guide to the walk-The Rutland Round (2000) – is still available (try Walkers in Oakham). It is possible to break the walk up into a series of shorter rambles, making use of rural bus services for the start and finish points.